All three are untested as of posting.

I’ve added a central games page https://za3k.com/mygames.md to my website, with all the games I designed. The new games:

Loot Boxes. Untested. Easy storytelling game for 2-4 players. The players have an inventory of absurd random items, and must solve challenges using each item in turn.

Stupid Russia. Tested. Party game for 10+ people. Each player is a spy director at the Stupid KGB, and must report as many codenames to the Inspector as possible, swapping secret information with other players. The players had fun, especially adopting bad accents. The rules were too hard to understand, and it was too much work and no fun for me as the Inspector. Overall I’d just recommend Stupid Conspiracies instead.

Stupid Conspiracies. Untested. Party Game for 8+ people. Each player tries to recruit the others into their conspiracy, for about half an hour. It’s a re-write of the core idea in Stupid Russia. Overall, big party games are just too hard for me to organize.

I also playtested “No this cannot be! I AM INVINCIBLE!”. It ran about 45 minutes prep (not fun) and 45 minutes playtime, which was the main problem. Overall the play time was fun. I rewrote it to have MUCH easier prep, and for the game to be generally easier. I also re-wrote the rules of “Ninjas Ninjas Ninjas” without a playtest. I don’t think it will ever be too popular but it has a soft spot for me.

I’ve written a few simple storytelling games or RPGs lately. They’re all under two pages of rules, and currently they’re all untested (first test is Monday!).

Will post my two spy games in a bit once I type them up!

https://www.rpgsolo.com/ has a table for resolving yes/no questions, in turn taken from FU RPG. Roll a die: 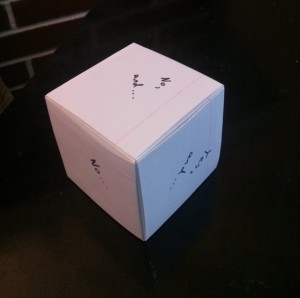 I listen at the door. Do I hear anything? (I determine the odds are 50/50 so I click the “50/50” button in the Get Answer section and I get back the following.)

(Now it’s up to me to determine what that means. Since it says “and” that means I got some kind of bonus. So I am going to interpret that to mean that from the sounds I am hearing I have received some extra information. So I type or say to myself),

I hear one person in the room. (Now I ask my next question.) Is the door locked?

(The answer is no but it’s not a total loss. I interpret what that means then type the following),

The door seems weak enough that I can probably kick it open.

So we’ve gotten a base system for telling stories. We then added the following:

It was pretty fun in practice. I recommend using a text file over paper, since you’re going to do a lot of copy-paste. We had more fun with no GM than with a GM. No firm result yet on sandbox-worldbuilding vs players in scenarios; both seemed all right.